It is not often that we have the opportunity within our given fields, or as members of Residential Resources, to be a part of restoring Nashville’s history — but in the case of restoring the Radnor Lake Valve house , that’s exactly what we worked together to achieve. The entire experience was rewarding for all parties involved, to trudge the historic trails where so many lives were changed, to knowing the significance of the valve house and how it changed  the evolution of Nashville and perceptions of steam locomotion. 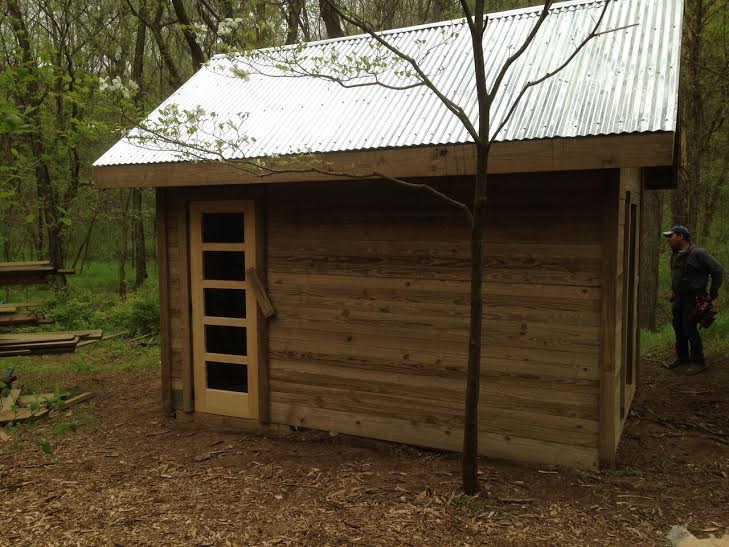 Before we can discuss the valve house, or the evolution of Radnor Lake Park, Radnor Lake itself must first be addressed. The Radnor Lake Valve house is located within beautiful Radnor Lake Park which encompasses 1,200 acres of trails and forests of class II natural areas. The area encompassing the park has become a haven for songbirds in recent years but this land is also steeped in rich history. During the Civil War this area witnessed fierce fighting, raids, and destruction due to its proximity to Granny White Pike, the Franklin Turnpike, and the Nashville & Decatur (now CSX) railroads. Both Confederate and Union armies maneuvered up and down these vital transportation routes throughout the war. Farms in this area fell victim to foragers from both armies, and enslaved those many who had escaped, or attempted, to the safety of the Union lines.

On February 6, 1862 Nashville was captured by the United States Army after General Grant captured Fort Henry and Fort Donelson on the Tennessee River. Following this action, Nashville became a boom town within months and the population swelled from a mere 17,000 to over 100,000! The railroad system was responsible for transporting troops and war materials needed to fight the Confederacy. This railroad’s routes came through Nashville due to its proximity on the Cumberland River. Nashville then became the third most fortified city on the continent, just after Washington, D.C. and Richmond, Virginia.

The lake was initially created to provide water for use by the L&N Railroad. In 1913, the railroad purchased 1,000 acres in the Overton Hills south of Nashville following completion of a railroad line from Decatur, Alabama to south Nashville. The railroad’s impetus was to build a reservoir large enough to supply water for its steam engines located at nearby Radnor Yards. With careful examination the downward running water supply and the basin below two ridges provided the perfect location. Otter Creek flowed through this basin, and over the next three years (1914-1917) and after the laborious man and horsepower needed to build the earthen dam and transform the landscape– Radnor Lake, the valve house and the valve therein was born. The lake was initially used for watering steam locomotives and supplying the watering pens for shipped livestock. Later on, it became a local sportsman’s club for L&N railroad executives and guests. 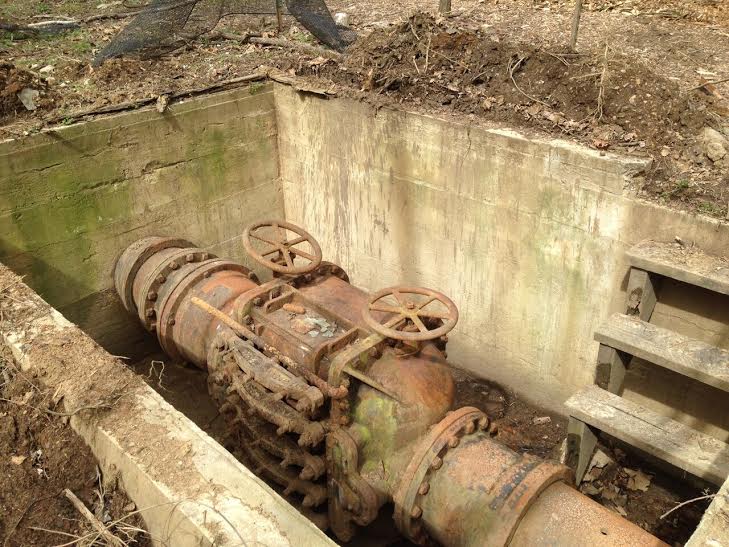 Inside the dam is a concrete and metal framework holding the pipes that allowed water to be drained from the lake. These pipes were connected to a valve to control the flow of water from the lake. A large metal valve was then turned by hand to control the flow of water to the rail yard. The valve house was built to serve as shelter for the valve and the caretaker of the property who laboriously oversaw and tended to the ever-important valve. The caretaker’s house was also located on the property. At the height of its use around 1,000,000 gallons of water were drained from the lake daily. As times changed and progress evolved, diesel engines became the standard making a large reservoir such as Radnor obsolete. Subsequently, L&N eventually sold the lake and surrounding hills to a developer. 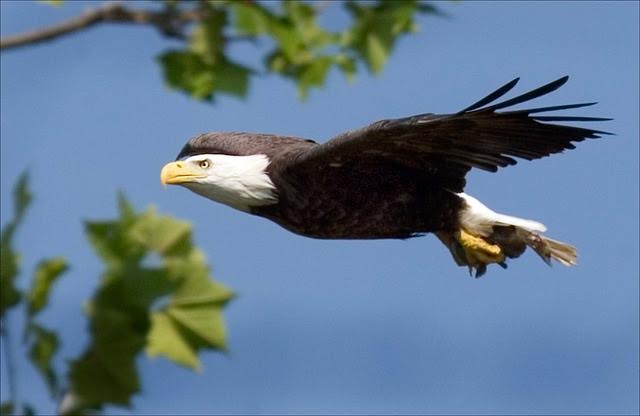 Then, a monumental effort was made to preserve the 747-acre tract of land as a natural area. Private citizens, scientists from local colleges and universities, state government officials, local land owners, and environmental groups such as The Nature Conservancy worked to raise funds to purchase the land. In 1973, with the help of the State of Tennessee, Friends of Radnor Lake and generous neighbors, Radnor Lake State Natural Area has grown by more than 520 acres. These land acquisitions have protected populations of wildlife and waterfowl including the endangered bald eagles. It also serves as a refuge for endangered wildflowers.

As time moved on, the valve house began to fall in disrepair. There was no longer a need for the valve to deliver water for steam. Like many relics of the past, the valve and valve house became a forgotten piece of history… leading to its eventual collapse. 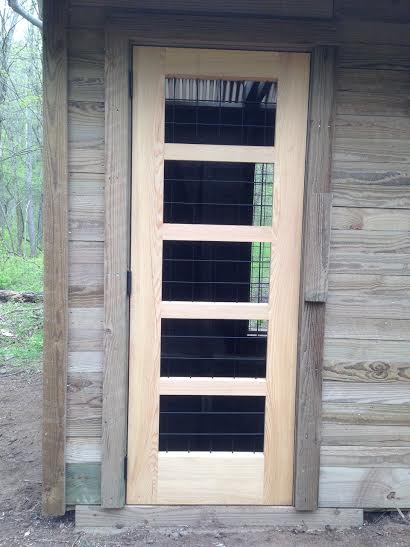 Fast Forward but not Forgotten

Fast forward to the fall of 2011, when lake volunteers and staff at Radnor Lake Park celebrated the opening of the Historic Valve House Trail at Radnor Lake.The project which had been years in the making, began with the actual construction of the trail in January 2012. The Historic Valve-House Trail gives visitors a historic, eductational hike as signage explains how the lake was created as an industrial site to provide water for use by the L&N Railroad. A team of volunteers worked to bring the 1st phase of this vision to life for all to enjoy.

The next phase of the project was scheduled to begin in January, 2014. This phase involved the actual reconstruction of the Valve House itself. Through countless hours of planning, dedication and wonderful volunteers, including those on the board of Radnor Lake, and members of Residential Resources, the project began to take shape. The next step was to reconstruct the decayed and flood damaged structure and rebuild it in its identical proportions and specifications and by using as much of the old structure as were salvageable. 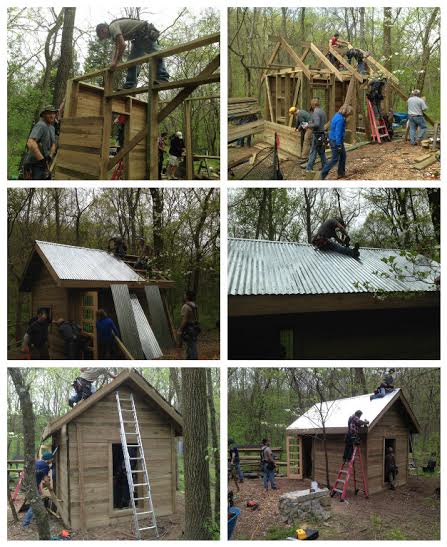 Our dedicated supporters set forth to bring the Valve House back to life. Friends of Radnor Lake board member Billy Leavell, and member of Residential Resources, whose company Turf Managers supplied all the lumber and materials to make the project possible. In addition, the materials were brought down the trail and on the site by a group of wonderful volunteers so Residential Resources member Nancy Moore, and her team at the Porch Company could begin rebuilding the house. The Porch Company took on the task of rebuilding the Valve House and with much help from her team and dedicated volunteers erected the structure in one day!

We would like to extend a heartfelt thank you to all of those who dedicated their time, materials and capital to ensuring a piece of Nashville history was restored for future generations to understand the significance of Radnor Lake beyond the beauty, bountiful blooms and birds.

This story is to be continued, as the next phase of the restoration will include the valve drain and the surrounding trails. You can help by attending  the upcoming National Trails Day at Radnor Lake Park or becoming a friend of Radnor Lake Park too through your donation or to volunteer. Visit radnorlake.org to learn more.